History of the College of Education

Joyce Collin Furman Hall (formerly Education Hall) is rich with history. The building stands at the eastern edge of OSU’s central campus core. The following records were generated by the College of Home Economics and Education. 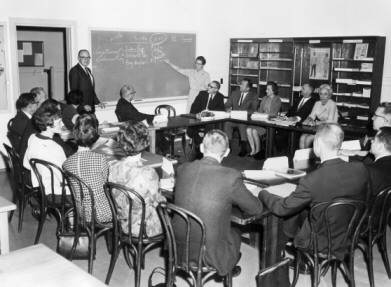 The offering of coursework in teacher education at OSU began under the direction of the Department of Industrial Pedagogy. Initially, only classes in the preparation of public school teachers in the topics of Elementary Agriculture, Domestic Science and Art, and Manual Training were offered.

Programs for the instruction of Commerce and Extension Methods were added to the curriculum.

OSU was designated by the State Board of Vocational Education to serve as a center for the preparation of teachers in vocational subjects and was organized into six areas of instruction: Agricultural Education, Commercial Education, Education, Home Economics Education, Industrial Education, and Psychology.

An administrative reorganization changes OSU’s teaching program from the School of Vocational Education to the School of Education and expanded the focus to include instruction in preparing students to teach in the Biological and Physical Sciences, Agriculture, Mathematics, Home Economics, Industrial Arts, Secretarial Science, or for educational and vocational guidance.

The School of Education expanded to include courses in physical education and a Department for Science Education.

The School of Science and the School of Education jointly administered the Department of Science Education. The major responsibility of the department of science education was to determine the kind and amount of preservice training necessary for junior and senior high school science teachers and aid in the in-service science teacher training program throughout the state.

The School of Education began to offer a four-year degree course in Elementary Education and later received national ten-year accreditation in elementary and secondary education and counseling.

A Doctorate of Philosophy in Education was first offered by the School.

Responding to budget cutbacks, the State Chancellor of Higher Education merged the OSU School of Education with that of Western Oregon State College (now WOU).

Despite creating the largest School of Education in Oregon and the region, the merger dissolved due to logistical complications. That same year, classes in the teaching program fell under the direction of the OSU College of Education.

The Department of Science and Mathematics Education merged back into the College of Education creating an integrated college with a focus on science, technology, engineering, and mathematics (STEM), with a strong commitment to cultural and linguistic diversity and lifelong learning.

The College of Education celebrates its centennial.