About the Parkrose Community

Parkrose is a neighborhood in the Northeast section of Portland, Oregon.

The Parkrose plat was filed October 5, 1911. A branch post office of Portland was established there in 1921.

Parkrose had been a small farming and residential suburb of Portland until the 1920s. The Oregon Journal noted on May 23, 1925, "Parkrose is a primary commuting center. . . . It is one of the most progressive and promising commuting districts on the eastern border of the city."

Parkrose was annexed by Portland, and the community was enumerated as a "Census-designated place" in 1980, when the community recorded a population of 21,108.[3] There is a Parkrose / Sumner Transit Center on 96th and Sandy Blvd Served by TriMet Bus Lines 12-Barber/Sandy Blvd 21-Sandy Blvd/233th and 71-60th/122nd ave. Max Light Rail Line Red Line Airport/City Center/Beaverton serves this stop and is connected by a bridge called the Salem bridge. C-TRAN 65 serves this stop and travels into Washington. line 87-Airport way/181st served this Transit Center until 9/12/2012. There is also a Parkrose School District, a small urban district in the northeast section of Portland with 4 elementary schools, 1 middle school and 1 high school serving the community.

* 69% of students in the entire Parkrose district are in the free or reduced school lunch program. 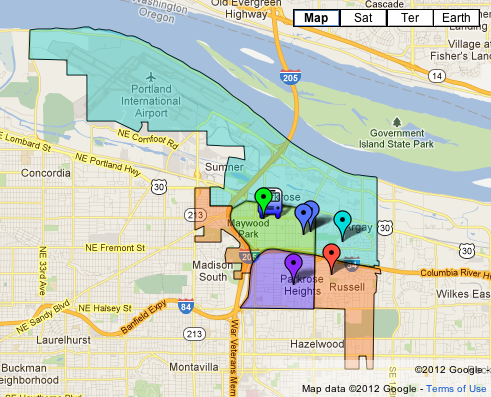